Possibility TV is a Christian Television Network  with the headquarter in Lagos, Nigeria.

Since its inception, POSSIBILITY TV has broadcast Christian programmes, stating that its vision is 'to preach the possibility power of God'.

Possiblity TV is  found on Mytv Channel 390 where Biblical Readings, Testimonies, Teaching and Christian Kids Programmes like Cartoons which are mainly about the Bible and Jesus Christ and many other programs are found.

The station is also known for its catch-phrase, ‘GOD OF POSSIBILITY CAN MAKE THE IMPOSSIBLE TO BECOME POSSIBLE’, encouraging viewers to ‘Believe in the working power of God’ with Prophet (DR) David Kingleo Elijah by ‘connecting 24\7’.

There are several claims of people receiving miraculous 'healing and deliverance' through these prayers of God anointed prophet, Major 1, including a man in Italy who received instant healing to the long tormenting sickness.


THE ORGANIZATION'S MISSION IS TO SPREAD THE GOSPEL, BRING HOPE TO THE HOPELESS, LIBERATE THE CAPTIVE  AND WITNESS THE POWER  OF GOD TO THE GENERAL PUBLIC BY BROADCASTING CHRISTIAN TV PROGRAMS.

POSSIBILITY TV
Major Prophet (DR) David Kingleo Elijah is an anointed Man of God with great love for God. He is a man God is using to liberate the world. Prophet David is the General Overseer of Mount of Possibility Church, Ojo, Lagos.
Home
Subscribe to: Posts (Atom)

About The Spiritual Leader

POSSIBILITY TV
Lagos, Lagos, Nigeria
Major Prophet (DR) David Kingleo Elijah is an anointed Man of God with great love for God. He is a man God is using to liberate the world. Prophet David is the General Overseer of Mount of Possibility Church, Ojo, Lagos. 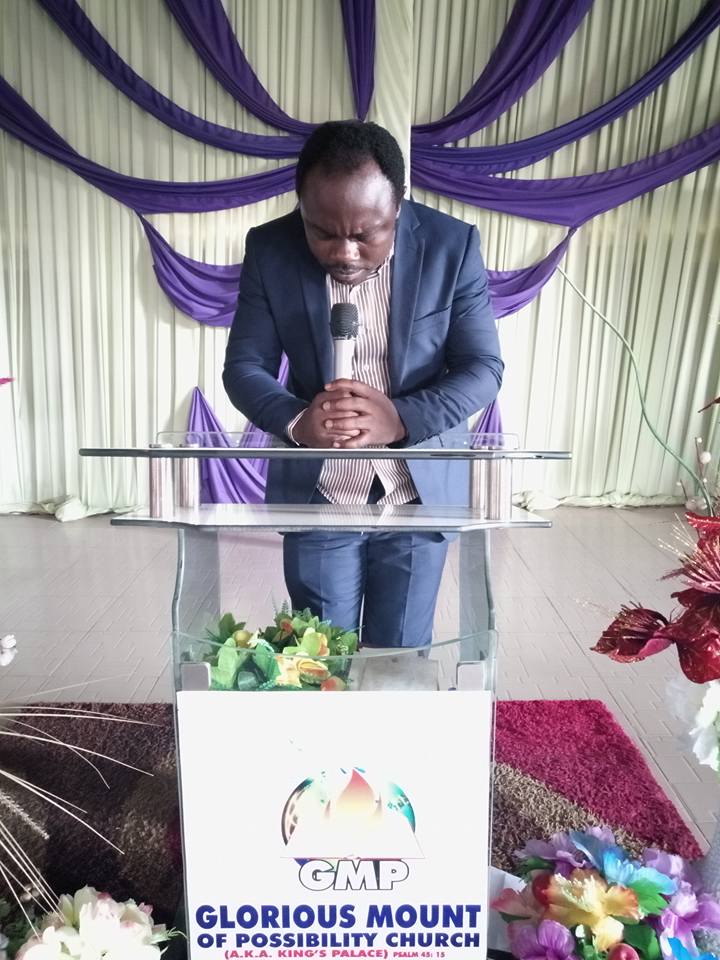 As a Prophet of God, I Pray for all my readers and viewers all over the world who subscribe to our social media platforms. May God give you a reason to smile, that situation that seems impossible in your life, the God of possibility will liberate you. God bless you

THE 6TH ANNIVERSARY CELEBRATION WITH AKPORORO

It was awesome in Ojo, Lagos, Nigeria as we hosted great musicians and comedians in Nigeria at our 6th Anniversary Celebration. It ended in Praise 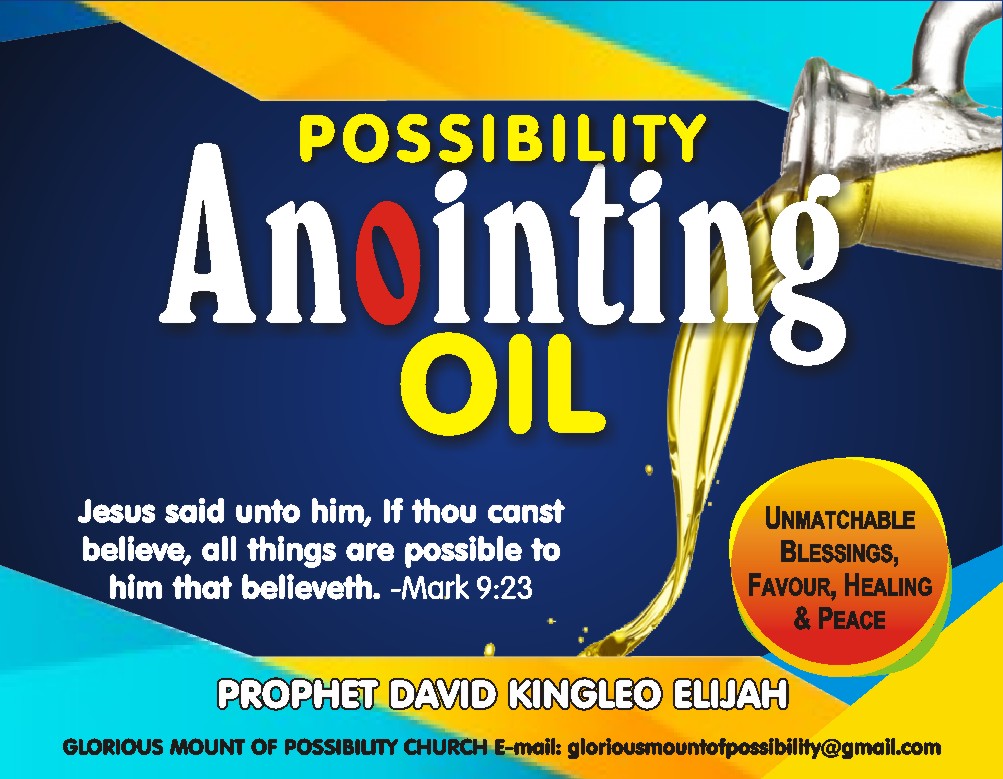 Possibility anointing oil is a miracle oil that has produce a lot of testimonies through the power of God. God has bless this oil to bring healing to the weak and deliverance to the captive. You need this oil. GET YOUR'S @ MOUNT OF POSSIBILITY CHURCH 25, DADA STREET, OJO, LAGOS, NIGERIA.

God use the Major Prophet to wipe the tears of a woman @ Mount Of Possibility Church in Ojo, Lagos, Nigeria.

POSSIBILITY TV is a channel under Glorious Mount Of Possibility Church. It is managed by Prophet (DR) David Kingleo Elijah with the mission to spread God's words to the end part of the earth. 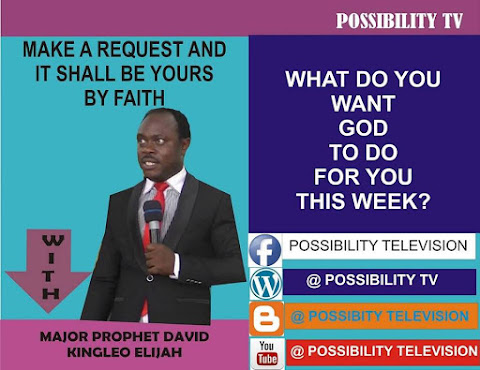 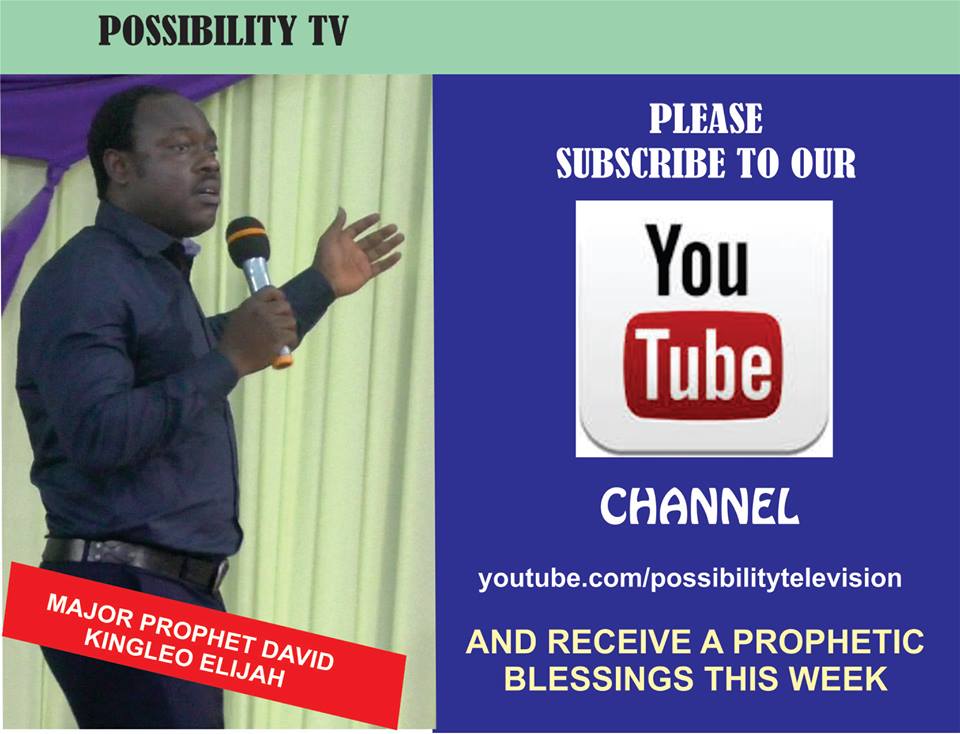